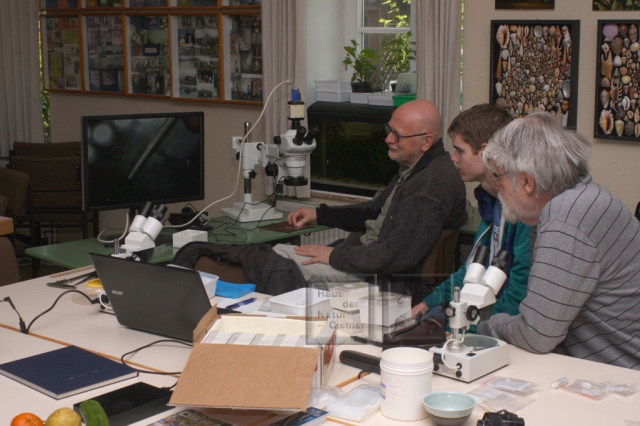 During the last week of April 2014 Jordy van der Beek and I were invited by Dr Bernd Sahlmann and Dr Vollrath Wiese of the Haus der Natur in the North of Germany for a second European workshop on Scaphopoda (Tuskshells).

Like during the first workshop in 2013, Bernd and Vollrath arranged excellent accommodation for Jordy (and his parents and sister) & me and we experienced their great hospitality, not only for using microscopes, literature and photo-equipment of the institute, but also much “kuche” and coffee and a nice dinner (many thanks to Gyde) at the last day of the workshop. During the workshop we discussed several subjects:

Thanks to loan of the Tel Aviv University, Israel and the Hebrew University of Jerusalem, Israel; for which we are Henk K. Mienis very greatfull, we were for the first time able to study deepwater forms from Red Sea locations. We could also establish Dentalium elephantinum Linnaeus, 1758, as a species belonging tot the Red Sea fauna.

We spent a day studying specimens from Indonesia, and got a better understanding of the scaphopod faunas of Western Java, Kalimantan and Ambon Island.

The last day of the workshop we focused on West African material, mainly consisting of deepwater Cadulus.

We may call the workshop a great success and Jordy and I hope to meet our German friends again in 2015.